I recently read an article by the indefatigable Wendell Berry in The Atlantic.  In the article, Mr. Berry continues on his quest for a change in the modern economy and the rules that govern it.  Instead of looking to bigger, badder, better, Berry suggests that the only hope for abundant life is to look to smaller models.  By establishing numerous smaller economies, the life of the world will once again begin to thrive precisely because the smaller scope of the economies lend themselves to practicing the virtue of neighborly love.  In his closing paragraph, Mr. Berry says,

“We have an ancient and long-enduring cultural imperative of neighborly love and work. This becomes ever more important as hardly imaginable suffering is imposed upon all creatures by industrial tools and industrial weapons.”

An ancient and long-enduring imperative of neighborly love and work.  It seems that Mr. Berry is correct on this count.  The reading from Acts today presents us with a whole different vision of economy than what we have in the modern era.  Instead of looking towards private ownership as the answer to the problem of supposed scarcity, the Acts of the Apostles tells us of a communal model for providing for the needs of the community.  In today’s reading, the author of Acts tells us that there was not a needy person among them and that all things were held in common.  Initially, we might think that the model for the community surrounding the apostles is a tradition from their Jewish culture; however, the model that is being written about here actually comes from the Hellenistic culture and illustrates a blending of the two cultures right from the beginning – from the start of the early Church.  The model comes out of the Hellenistic understanding of friendship as found in the writings of philosophers like Plato and Cicero.

Today, we have the means to produce more food that any other time in history.  We have the knowledge to bring goods to market at lightning speed.  We have created newer, faster ways of communicating with each other.  Yet, in spite of all of these advances in human achievement, we have yet to figure out how to feed the world, to clothe the naked, to care for the sick and the dying.  We have yet to figure out that it is only in caring for each other that we are going to be able to thrive.  We have yet to realize that our progress in human achievement is coming at significant costs to ourselves.  We fail to recognize that by being focused on the fast-paced life of modernity that we are leaving people behind as we march towards progress, towards better times.

Though Mr. Berry is speaking out against industrial agriculture and the damage of the industrialized economy in general, I think that his words could also be applied to the Church.  The work of the Church is to practice neighborly love and work, but we cannot do that if we are focused only on growing the numbers of people that attend a particular parish at a particular time.  To focus on the growth of a single parish is to practice the same kind of economy that Wendell Berry has spent much of his life writing against.  If we are serious about practicing neighborly love and work in the Church, the work of growing the Church is not being concerned about increasing the numbers of a particular parish; instead, it is about looking out and seeing how the Church can grow through numerous, smaller economies in its future.  To use the words of Wendell Berry once again,

“The gait most congenial to agrarian thought and sensibility is walking. It is the gait best suited to paying attention…” 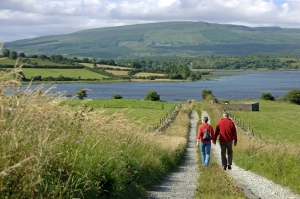 The gait of walking is the gait that is best suited to paying attention to the needs of the smaller economies upon which a community relies.  In the modern age, the practice of the Hellenistic model of friendship seems outdated and out of place; however, it may be the precise medicine that is needed not only in the world at large but also within the Church.  Instead of running towards the bigger, richer parish, we could practice the virtue of walking next to our neighbor, listening to her pains and joys, and taking the time to stop and think with each other.  We are called to participate in a common economy much like the apostles in today’s story from Acts.  We are called to collaborate with each other in order to discover the gifts that we are able to bring to the Church, which becomes the very source of abundant life in the Church.

It is possible to heal the world, to feed the hungry, and to clothe the naked throughout the world, but we cannot do that if we are running.  If we are serious about practicing the virtue of neighborly love and work, we must remember that the natural gait for doing so is that of a walk.  It is the gait that allows us to listen, to learn, and to think about where Christ is calling the Church, and it is the gait that enables smaller economies to thrive.

Stories from the Road