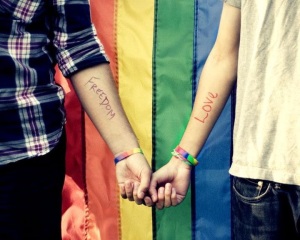 The events of the past week have left many people reeling in pain, confusion, fear, and grief.  The shooting at Pulse in Orlando has launched many to decry the fatal shooting (although not all of them could actually do so while also recognizing that the LGBT community was the target).  It has left a community with questions that it has to answer for itself, and it has marred a month that is often a month of celebration for LGBT Americans across the country.

Of equal import is the fact that this deadly attack happened in a place that has served (and continues to serve) as a place of hope.  The attack happened in one of few venues in which LGBT persons can be who they are without getting sideways glances from others. It is a place where it is normal to see two boys or two girls holding hands or even giving each other a peck on the cheek in between chatting with friends.  It is a place in which you can do all of these things and be understood as completely normal.

It was another hot, heavy night. Like most Mississippi summer nights, the air swirled around you as you swam through it to get to where you were going.  The air would condense on your skin as you walked making the night air as heavy as an old patchwork quilt.  As he trudged up the street, the Mississippi air swirled his shaggy blond hair down in front of chestnut brown eyes. In retreat from a largely disappointing evening, he swallowed himself in his own thoughts.

As he continued up the street, a shrill sound came piercingly into the night.  The silence that had engulfed him only moments before was shattered into millions of pieces. He reached into his pocket and mumbled a half-hearted hello into the receiver. On the other end, two of his friends screamed into the receiver yanking him back into reality. They wanted him to go to the one place he knew he should not go. It was his hometown after all, and in a place like Mississippi, people talked about where you went and who your friends were.

He immediately went into a series of flashbacks from high school. He vividly remembered walking down the dilapidated halls hearing the word “fag” or “queer” shouted after him. Then, just as now, he wanted to ignore the truth, yet it seemed that everyone else already knew what he could not admit to himself. Perhaps it was an act of self-preservation or a way to simply survive the tumultuous events known as high school, but it did not explain why he had not ventured out to explore his feelings until this night.

Of course, in his mind, he knew exactly why he prolonged the inevitable for so long. He lived in Mississippi. It was a place where everyone knew your family, and the expectation of the oldest son was to become successful, to be a leader in the community. One thing that was absolutely not acceptable – being gay. If he dared to explore his true feelings and desires, he knew that his family would know in a matter of weeks or even days. He knew it was Mississippi, and in Mississippi, people talked about everyone.

Regardless, he would not be able to find a way out of the fateful trip down the Highway 42 Bypass that night. The Jeep soon lumbered into his drive, and he hesitated to join his friends in a trip that he knew could change the direction of his life. For years he resisted the temptation to act upon his attraction to men. He knew that in his home state it could lead to disaster. Desperately, he sought a way out of joining his friends, but they refused to take no for an answer.

He slowly climbed into the back seat of the bright yellow Jeep with Katy and Jason.  As they rolled down Highway 42, the butterflies in his stomach swirled around and around forming a cyclone of uncertainty. He knew that they were going to the one place he should be the most comfortable, yet he could feel his head growing lighter and lighter as the miles ticked past. With each second, fear crashed down upon him. The hurricane of fear swirled just off the coast of his being and was sending its powerful waves over and through him.  They crashed into the shores of his being and swept him ever closer to the center of the storm.

Finally, they pulled into the overcrowded parking lot.  The building was an old white sheet metal building that had seen better days.  In the shape of an oversized barn, it looked like a drive-in beer barn converted into a warehouse.  The plain white building seemingly showed no signs of life other than a dimly lit roadside marquee with a rusted arrow on the top of it.  The shape of the arrow was dotted with rusted holes that once held light bulbs.  Just beneath the arrow, the sign read, “Rumours.”

Katy and Jason dragged him closer and closer to the dilapidated building until finally getting him inside the door.  The entry way opened up to a vast room with just enough light to see the writhing bodies on the dance floor as the bass line of the music coursed through them.  One one side of the building was a sparsely populated bar; on the other side, groups of people ignored everything around them as they prepared to strike the queue ball resting on a sea of green felt.

The three new people made their way over to the bar.  All he could do was hope that a cold beer would help to calm his nerves a little bit.  The cold frothy drink flowed down his throat in a single gulp; he quickly ordered up another.  As he slowly sank into a bar stool, he began to think that the night would not be so life changing after all.  Thus far, nothing out of the ordinary had taken place. It was just another bar in a small Mississippi town, after all.  At least he had not been confused for one of “them.”

As if precisely on queue, Jason introduced him to a friend of his named Rob.  Rob leaned in to give a peck on his cheek; as soon as he realized what was happening, he leapt up from the bar stool as quickly as a jackrabbit.  Realizing that the kiss was a bad idea, Rob extended his hand with a polite, “Nice to meet you.”

Once his nerves settled, Katy convinced him to venture out on to the dance floor for some good laughs and dancing.  As they spun around the dance floor, he began to relax more and more.  The evening that started with disappointment was beginning to turn into an evening filled with fun and frivolity with friends.

All too soon, the three of them left the dilapidated building and headed for the Jeep.  The drive back up Highway 42 no longer carried the fear that it promised earlier in the night.  Instead, it was a newly discovered yellow brick road that lead to a place of hope, of normalcy, of reality.  While he might not have been ready to come bursting on to the gay scene that evening, he had discovered a community of people that understood.  They understood the need for a place to congregate and to be themselves.  They understood the need to become a community in order to give each other hope.